RIWAC’s 11th symposium was held on Dec. 14th. The theme was “Thinking about the work style that connects work and life”.  It was successful and meaningful with over one hundred participants.

At the end, general discussion with questions from participants was held by the above four 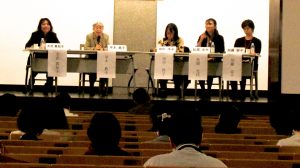 【Report】 Symposium : “Promotion of Women’s Participation and Advancement in the Workplace, and Work-style Reforms”

RIWAC’s 10th anniversary symposium was held on Dec. 8th. The theme was “Promotion of Women’s Participation and Advancement in the Workplace, and Work-style Reforms”. It was successful and fruitful with around one hundred participants.

“RIWAC’s history of the decade, and Problems of female labor in Japan from the standpoint of international comparison” by Prof. Machiko Osawa, Director of RIWAC

Panelist Lectures and General Discussion with answers to questions from the floor were held by Prof. Emiko Takeishi, Ms. Yoko Yajima, Executive Officer of Mitsubishi UFJ Research and Consulting, and Prof. Machiko Osawa. They were also carrying out discussion about both practical issues and their solutions.

【Report】Symposium “What can Universities do to Help the Career Development of Women?”

In the first session, a report was given on the results of the “Comprehensive Research Concerning Career Support for Women and the Roles of Universities” (2011-2015 Ministry of Education, Culture, Sports, Science and Technology [MEXT] Strategic Research Base Development Program for Private Universities), which the Research Institute for Women and Careers (RIWAC) had been working on for the past five years. This research project had two central themes, and the research processes and outcomes were presented with regard to each of these themes.

The first theme was “Reanalyzing surveys on postwar society related to women and careers, and publicizing and using archives of surveys regarding women.” A report was given on the use of archives of surveys regarding women by RIWAC, and another report was given on the results of analysis centering the areas of education and family based on a collection of approximately 1,500 data items. It was shown that social surveys reflect the circumstances and interests of societies.

Following this, RIWAC Director Machiko Osawa provided a review, stating that the range of support for the career development of women that has been viewed as conventional up to now needs to be expanded; public support to promote active roles for female university graduates is lacking and thus involvement is needed in terms of education; it has been shown that in the future, systems should be built that fit recruitment needs on the part of companies and employment needs on the part of women, thus the key to vitalizing society as a whole is creating “second-chance companies” that provide many second chances. External evaluation committee members Ms.Teruko Ohno and Ms. Nami Otsuki then provided a critique regarding the implementation and outcomes of this project.

During the second session, Professor Mary Brinton, Reischauer Institute Professor of Sociology and Department Chair, Harvard University, who had been invited to give a lecture, gave one entitled, “Second-Chance Labor Markets: Benefits for Women and Men.” Prof. Brinton pointed out that in the case of Japanese companies, people are generally employed at the same company for a long period of time, so, relative to the United States, changing jobs between companies is extremely rare, and this limits the bargaining power that workers have with regard to companies. If the possibility of moving to another company were higher, this would reduce the need for workers to give priority to what is convenient for the company in terms of work conditions and content. As such, it is necessary to shift from valuing lifetime employment to valuing the ability to change jobs. In order to achieve this, it will be important for individual workers to acquire skills that are portable. Prof. Brinton pointed out that education will become increasingly important in this respect.

After this very stimulating lecture, there was a lively exchange of questions and opinions with the audience, which included an audience member asking about the specific types of education that Japanese universities can provide. The symposium was thus very fruitful.

The minutes of this symposium are scheduled to be printed in the FY2016 RIWAC bulletin “Gendai Josei to Kyaria (Modern Women and Careers)” Issue No. 8.

The program included tours of Seiyu stores, the company’s logistics center, food factory, and other locations where participants held discussions with employees to discover issues in workplaces where they offered solutions.

Participants discussed enthusiastically proposing new ideas over a period of three days. On the final day of the program, participants gave a presentation in front of Seiyu executives and exchange ideas and answering the questions.